THE 13 PRINCIPLES: # 9. The Tora will not be changed or replaced

The ninth principle asserts that our God given Law, the Tora ( see this), could never be changed or replaced by another set of Laws.

Rabbi Pereira-Mendes explains:  "Our Tora was given us by God. He does not change. And His word stands for ever....It is because we believe that our Law never was and never is to be changed, that we reject Christianity." Christianity and Islam share with Judaism the Eight Principle, i.e., the belief in the divine origin of the Tora.  But the Christian faith claims that God changed His mind and annulled the Pact with Israel (=ma'amad har Sinai, when God made Israel His chosen people) and now He made a new pact (berit chadasha) or a new testament with the Church, annulling the Biblical commandments and replacing them with a new set of laws.

Similarly, Islam accepts the divinity of the Tora, but their claim is that Mohammed's prophecies were greater than Moshe Rabbenu (whom they also venerate) and the Qoran, therefore, replaces the Hebrew Bible.

The ninth principle conveys our categorical rejection of all these theories of replacement.  Every prophet in the Hebrew Bible came to teach and uphold the Tora and to encourage the People of Israel to be faithful to its commandments, not to change them. The Tora establishes clearly and explicitly (Deut. 13:2-6) that if a prophet comes and claims that we should modify even one Mitzva of the Tora, we know that he is a false prophet. Even though this prophet shows that he is capable of performing miracles, something which apparently would give credibility to his prophecy, we are commanded explicitly to reject his message and consider him a false prophet.  "In all these cases", Maimonides says "we know that such a prophet is speaking presumptuously in God's name, making up something not told him by God. For God Himself told Moses that these commandments (=The Tora) is for us and our descendants forever".

Tonight is the 15 of the month of Ab, a happy day in the Jewish Calendar.
Click here to read:  "Six events occurred on Tu B'Ab, the 15th of Av, making it a festive day in the Jewish calendar" by Rabbi Israel Meir Lau, former Chief Rabbi of Israel, from Aish

In 1925 he came to Jerusalem where he studied with the greatest rabbis of the time: Rabbi Chizqiya Shabetay, Rabbi Ben-Zion Abraham Cuenca and Rabbi Ben-Zion Uziel among others.

Rabbi Nissim established one of the first rabbinical academies in Jerusalem, among his students were Rabbi Mordechai Elyahu , who was also a chief rabbi of Israel from 1983-1993.
Rabbi Nissim struggled to unify the Jews that lived in Israel. He thought that after centuries of being separated, Sephardic and Ashkenazi Jews and very especially religious and non-religious Jews should leave the differences aside and find the common grounds between them. He endeavored to create and build bridges of communication in which all Jews would work together to build a unified "Israel".
Rabbi Nissim became world famous for his refusal to meet with the pope Paulus the Sixth in 1964. When the pope came to visit Israel, he made sure to visit East Jerusalem (in those days in the hands of the Jordanians), but he deliberately avoided Israeli-controlled West Jerusalem, forcing Israeli President Zalman Shazar and Prime Minister Levi Eshkol to travel to the northern town of Meggido to greet him in a 20-minute ceremony.  Rabbi Nissim was invited as part of the delegation that would meet the Pope in Megiddo, but he refused to go.  Reasoning that if he would attend that ceremony he would legitimize the Vatican's delegitimization of Israel.  (The Vatican did not recognize Israel as a state. In a thank-you letter sent to Israeli president Zalman Shazar, for example, the pope deliberately left out the title "President", and erroneously but pointedly addressed it to Tel Aviv rather than Jerusalem). Rabbi Nissim was known as "the Rabbi that dared said "no" to the Pope". The Israeli newspaper haAretz declared that the refusal of the Rabbi was an historical event, because it was a strong symbol of the independence of the State of Israel.

Rabbi Nissim died in Jerusalem in 1981.

Professor Meir Benayahu, one of the most important scholars of Jewish studies in modern times,  and former Kenesset member and Israeli Minister  Moshe Nissim were his sons. 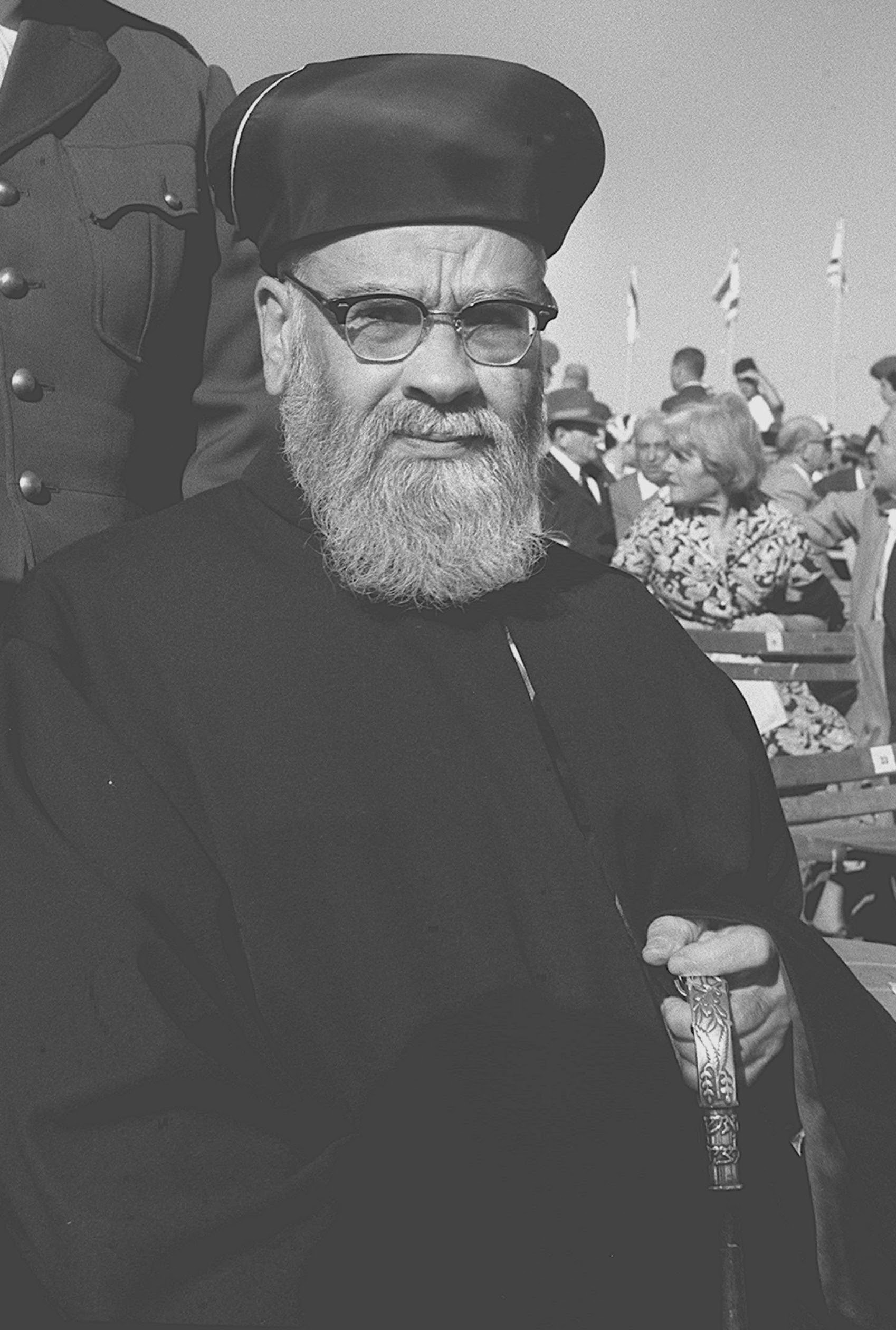 √ Read more here about the controversial visit of pope Paulus the sixth to Israel in 1964.

The Rabbis defined geneabt da'at  (stealing other people mind) as a situation in which I mislead other people to think favorably about me or about an action I did (see here).

Some times however, there are borderline circumstances, in which a positive but misleading impression is leftinvoluntarily. The Rabbis argued about the merits of this matter.

A real example: It was customary that when a Rabbi would come to town his students or colleagues would go to welcome him before he reached the city. It happened that two rabbis, Raba and Rab Safra, left their city to take care of some personal matters and to their surprise on the way they met a distinguished rabbi, Mor Zutra, who was coming into their city. Mor Zutra thought that they came to welcome him, and with a deep sense of gratitude he said: "I'm so honored that such distinguished Rabbis like you have come all the way to welcome me!". Rab Safra, which was famous for being extremely straightforward and truthful said: "Well, the truth is that we did not know that you were coming. We were in our way for a different matter and we happened to meet you. However, if we would have known of your coming, we would have received you with more honors". Later on Raba questioned Rab Safra's attitude and said to him: "Why did you have to hurt Mor Zutra who thought that we were coming to honor him?". Raba added "In this case we did not initiate anything proactively with the intention of leaving a false big impression on him! We did not want to mislead him. But now we have actually hurt him and embarrass him!".

When the other Rabbis heard and analyzed this case they thought that Raba was right and they asserted that the prohibition of causing a positive false impression on someone applies when we initiate the misleading action, but if the other person brings himself to that impression, and especially in this type of situations bordering with embarrassment, then we do not need to rectify the false positive impression we left.

WATCH   Is Israel an apartheid state?   by Dennis Prager

In ancient times, a member of the wedding party was known as the shushbin. We find that when Samson (=Shimshon) was married, he took thirty young men to be the close members of his wedding party.  In Talmudic times, the wedding feast was often made as a communal meal and the attendees were called the shushbinim (plural of shushbin).

In modern times, we often have more than thirty guests at a wedding. The shushbinim in our days are not the only attendees but the closest friends (the members of his "do-re" in Persian culture) of the groom. The bride also has her shushbinim (or bridesmaids). One of the shushbinim -writes Rabbi Aryeh Kaplan- would be at the groom's or the bride right hand, and take care of all his or her needs. It could be a friend or a relative of the groom (a brother, a cousin, etc.)  He would act as the groom's secretary and valet, seeing the details of the wedding. He would often announce the honors at the ceremony and would make sure that the ceremony and dinner run smoothly. In modern terms, we would call this shushbin "the best man".

Maimonides dedicates a whole chapter in Mshne Tora (zekhia umatana, chapter 7) to describe the function of the shushbinim, which is radically different from the modern concept of the best man (or "men"). He says that the tradition in all Jewish communities is that when one gets married his close friends give him some monetary gift to afford the expenses of the wedding. These close friends, whom with their gifts assist the groom to afford the wedding party, are known as the shushbinim. In general, Maimonides explains, the monetary gifts are given generously, of an amount above the cost of the food the friends are served at the party. In return, the groom is expected (read: legally expected) to do the same thing toward his friends when they get married. Thus, everyone in that group of friends supports each other to afford the expenses of the wedding party.

Read  LOVE INFUSIONS  "Three ways to bring love back into your relationship".  By Rabbi Shlomo Slatkin, from Aish.com