Thanksgiving to God, by George Washington

"And, also that we may then unite in most humbly offering our prayers and supplications to the Great Lord and Ruler of Nations, and beseech Him to pardon our national and other transgressions, to enable us all, whether in public or private stations, to perform our several and relative duties properly and punctually...
"To promote the knowledge and practice of true religion and virtue, and the increase of science among them and us, and generally to grant unto all mankind such a degree of temporal prosperity as He alone knows to be best.
"Given under my hand at the City of New York the third day of October in the year 1789.

American Rabbis have discussed the celebration of Thanksgiving.

The following lines by Rabbi Broyde summarize his conclusion and that of most Modern Orthodox Rabbis.

"Thus, halacha law permits one to have a private Thanksgiving celebration with one's ... friends and family. For reasons related to citizenship and the gratitude we feel towards the United States government, I would even suggest that such conduct is wise and proper".

Rabbi Hayim (Henry) Pereira Mendes was born in England on April 13, 1852. Coming from a long line of Sephardic rabbis, including his father, Abraham Pereira Mendes, and his maternal grandfather, David Aaron de Sola.  At the age of twelve he began his studies at London's Northwick College, a boarding school which combined secular and religious studies, founded and directed by his father. From 1870 through 1872, while continuing his studies at Northwick, Mendes also attended London's University College.

In 1873, Mendes began his ministry at the newly-formed Sephardic congregation in Manchester, England. In 1877, he was called to the United States to serve as Rabbi in New York City's Congregation Shearith Israel, where he was to remain the rest of his life.

In 1884 he received a medical degree from New York University.

Apart from serving Shearith Israel as Rabbi and Hazan, he was involved in a vast array of other activities. He was instrumental in the organization of many communal projects in New York, such as the Montefiore Hospital, the Institute for the Improved Instruction of Deaf-Mutes, the New York Guild for the Jewish Blind and the New York Kehillah.

Championing an enlightened modern Orthodoxy, Rabbi Mendes used his privileged position as rabbi at Shearith Israel to work closely with all sectarian and social elements in Jewish life.  He was one of the founders and leaders of the Union of Orthodox Congregations of America and the New York Board of Jewish Ministers. Rabbi Mendes also served as professor of homiletics at Yeshiva Isaac Elchanan (Yeshiva University) from 1917 to 1920.

At the personal request of Theodor Herzl, he became one of the founders of the Federation of American Zionists. Until his death, he worked to promote the religious ideals of Zionism.

Rabbi Mendes was also a prolific writer. His books include religious books for children and adults, prayer books, poetry and plays. 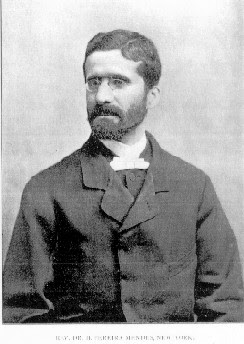 Loving, in the Hebrew mind, is voluntary. Otherwise, it would not have been mandatory (You "shall" love...). Love is not the spontaneous feeling of affection that is there or disappears at the will of cupid or a magic potion, but the product of a series of elective actions and thoughts.   "Loving someone" at the most basic level means "thinking about someone". This thought is then translated into "Taking care of...", "Looking out for...", "Doing for..." etc.  We know we love a person when we have that person in our mind.  If we are indifferent to that person, chances are that we might like or even need that person, but we might not love him or her.

When we really love someone with passion (our spouse, our children) we can't stop thinking about them. The best proof we love ourselves so much (and so passionately) is that we are constantly thinking about ourselves!

Loving God means, bringing ourselves to think about God. Reminding ourselves of Him, of His presence, of His kindness, of His constant care for us. The more we bring God to our mind, the more we love God, and vice versa.

This is how Maimonides (H. Teshuba, 10:5) explains our verse: Loving God with all our heart means loving Him with passion (ahaba 'aza 'ad me-od). Ideally, a Jew should be in-love with God, which means, thinking about Him constantly (veshoge bah tamid).

Maimonides also explains there that we should not serve God for a reward (that would be another way of loving "ourselves") and not even for yir-a or fear of a punishment (that will be a way of "looking out" for ourselves) but for pure love of Him.

Pidyon haBen is the ceremony by which the father redeems his first born son from the Cohen. The Pidyon takes place after 30 days from the day of birth. As we have explained, there are certain conditions that need to be met in order to perform the Pidyon ( see here).

If possible, one should arrange to have a Minyan for the Pidyon.

The parents dress themselves and their son as they would do for a holiday.

The father brings 5 sheqels of silver.

The Cohen asks the mother if her son is the bekhor. If the mother says "yes", the Cohen proceeds to recite a text (ze haben bekhor hu...) where he quotes the Mitzva of redeeming the first born and asserts that, indeed, the parents have expressed their will to redeem him (veabikha veimekha mebaqeshim lifdotekha...).

The Cohen then asks the parents:  "Which would you rather have-your firstborn son, or the five coins which you are obligated to give me for the redemption of this your firstborn son?"
To which the father answers:  "I want, my firstborn son, and here you have five coins which are required of me for the redemption".
Then the father says the blessings: ...'al pidyon haben. and ... shehecheyanu....   And he places in front of the Cohen the 5 shequels.

The Cohen takes the coins and says: "I've received the 5 silver coins for the redemption of your son. He is now redeemed according to the law of Moshe and Israel (kedat moshe veIsrael)".  The Cohen blesses the child, placing his hands over his head.  At the end of that blessing the Cohen also blesses the parents and wish them to merit to fulfill all the Mitzvot of the Tora.

The Cohen can keep for himself the 5 shequels, or give it back to the parents, if the Cohen wishes to do so.
Hebrew text of the Ceremony of Pidyon haBen (Sephardic)


Video of a Ceremony of Pidyon haBen in Manchester, England (Ashkenazi)